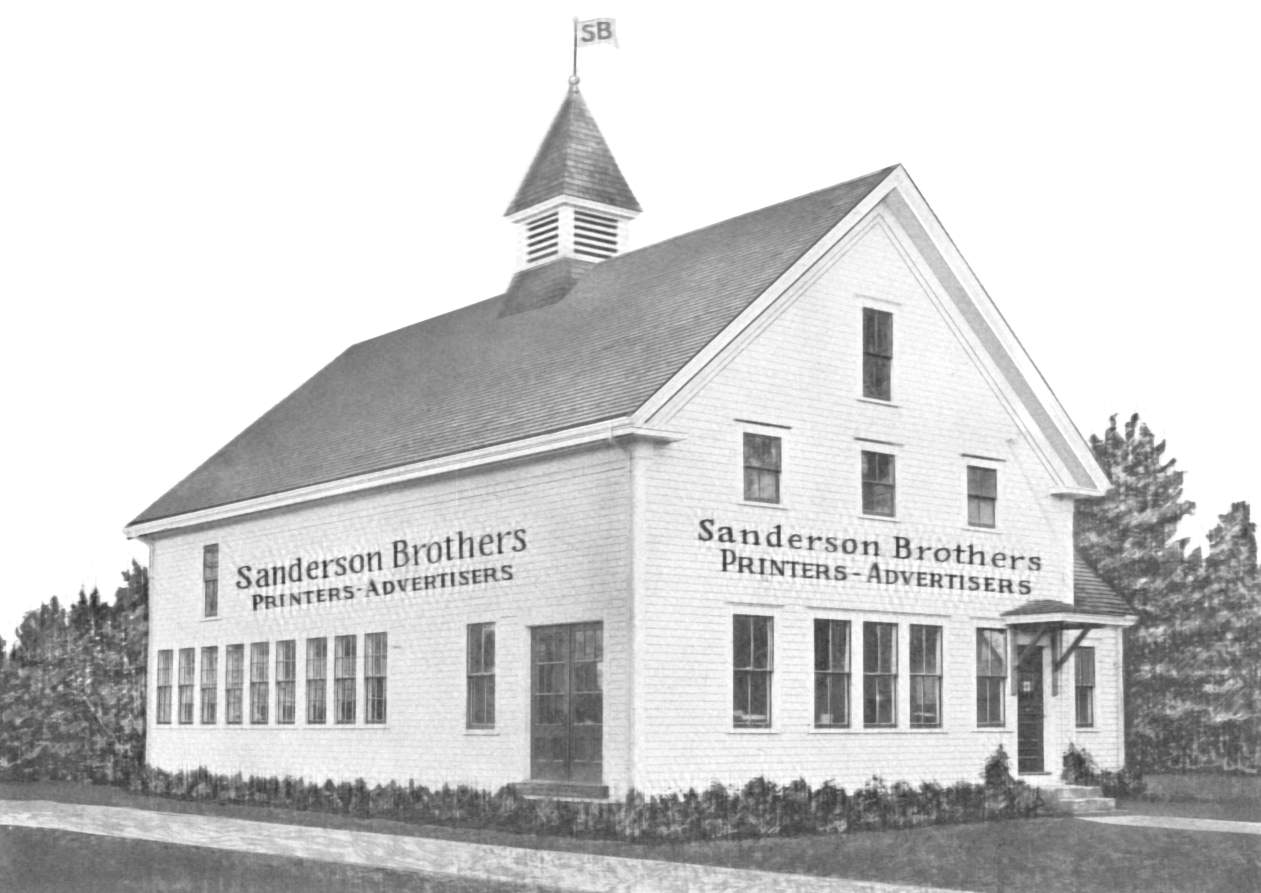 You may know of the current Sanderson Brothers, Mark and Bruce, but did you know that the family has actually had three generations of brothers in the print industry? The current pair were preceded by their father, Robert (or Sandy), and his cousin, Don. As you can imagine, a lot of interesting events have occurred since the first set of Sanderson brothers entered the world of print, but the beginning is the only logical place to start. Every company has an origin story. This is ours...

The business was originally financed through a loan of $900 from the boys’ father. This was used to purchase an 8 x 12 Multicolor Press, a cabinet of type cases, a 19'' paper cutter, and other miscellaneous supplies and equipment, including a pot-bellied stove for heat. Unlike many other teenagers, after school and on the weekends, you could find the Sanderson brothers devoting their time to the growth of their business.

Then came their college years. Despite the fact that both boys did go away to school for a period of time, they each still kept a hand in their small printing business. Buster went to Boston University for two years before deciding to focus full-time on Sanderson Brothers. While Buster was back and operating the business, Bob attended Brown University for four years, but he always came home to help during school breaks.

Their hard work and persistence paid off as the business consistently grew during that first handful of years. Equipment, personnel, and space were added to keep up with this progression. Then, in 1926, they bought out the private printing plant of the Glenwood Range Co. in Taunton, MA. Along with this purchase came the need for even more space, so they began work on the first floor of the Crossett Shoe Company, which was right in North Abington. After continued expansion, a barn was also purchased from Crossett and remodeled to accommodate the needs of the business.

Then the Great Depression hit. Thankfully, a business sideline of selling steel office equipment saved Sanderson Brothers from falling by the wayside like so many other businesses did during that time. Because of government make-work projects, such as PWA and WPA, schools and other public buildings were constructed during this time period. The brothers were able to capitalize on this by selling a considerable number of file cabinets, desks, lockers, and other furniture. This allowed the business to keep on the black side of the ledger through most of this difficult time.

During the 1930s, the majority of the actual printing happening at Sanderson Brothers fell in the category of office and factory forms, which they found to be a highly competitive field. In an effort to stand out from the crowd, they hired an artist to generate ideas and guide the business toward advertising and sales promotion (a less competitive part of the printing industry at the time). Unfortunately, by the 1940s, the escalation of World War II curtailed much of the country’s advertising printing. However, in its place came enough printing work for the Hingham Naval Ammunition Depot to keep Sanderson Brothers humming for several years and more than compensated for any losses incurred during the depression. In fact, Sanbro expanded again in 1941 and purchased a 6,000 square foot garage as well as five-and-one-half acres of land. 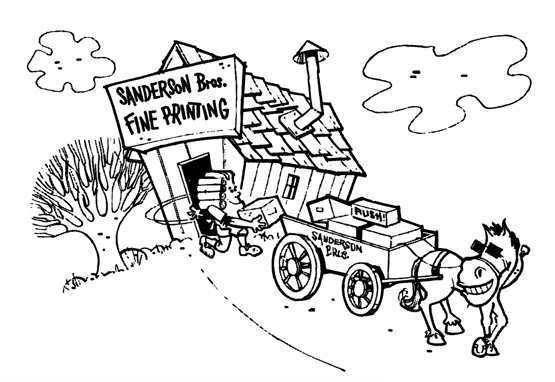 After the war, despite everyone’s concerns, business actually picked up due to the new demand for commercial printing. In 1946, they began to dabble in offset lithography as it was quite popular at the time and they wanted to remain competitive. Since this kind of printing was new to the company, it caused quite a few headaches. However, this branch of the business expanded in spite of all the pitfalls. Through this, the Sanderson brothers learned that keeping up with the pace of progress is not always easy, but it is almost always worth it. The addition of offset lithography increased the volume of business to the extent that another 6,000 square feet and larger equipment were added within the year. Then, in 1953, a 5,500 square foot warehouse for paper inventory was acquired to combat rent and transportation costs. 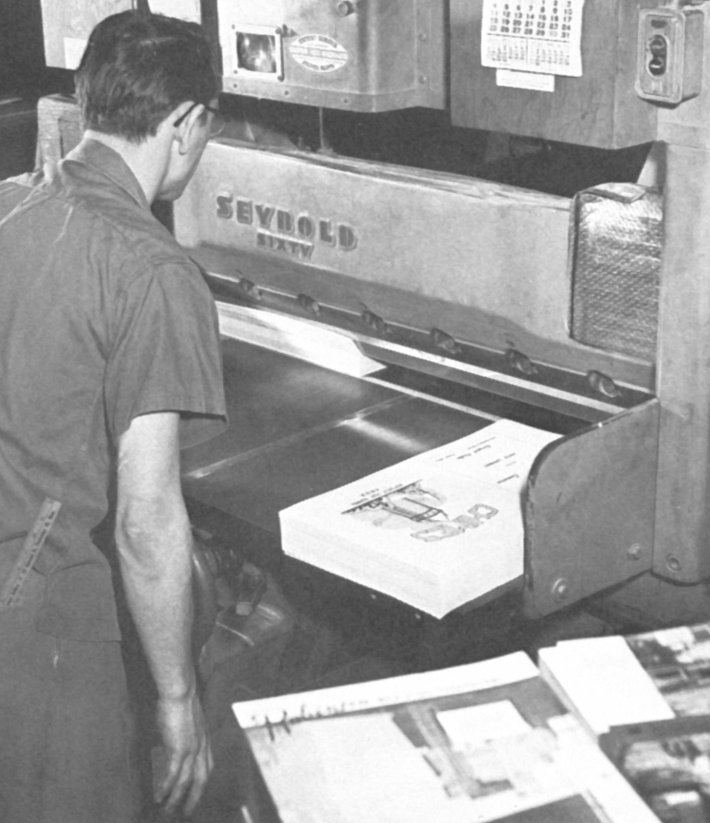 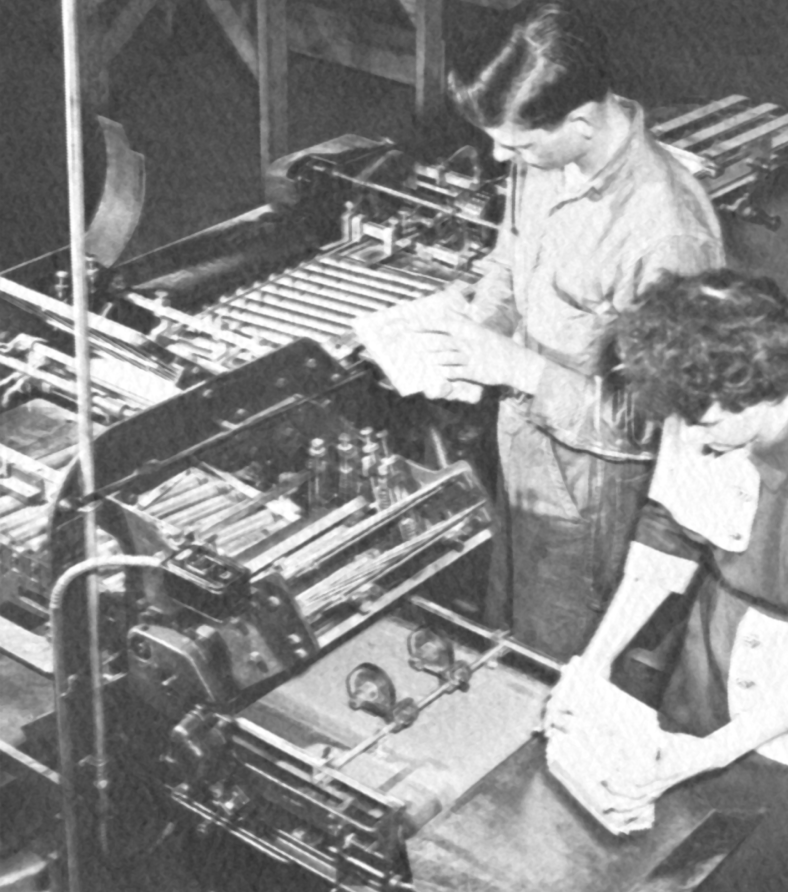 As the business grew, so did others’ awareness of Sanderson Brothers. In the ‘50s, the Polaroid Corporation was involved with the exciting prospect of presenting theatergoers with three-dimensional movies through the use of their patented butyrate lenses. Sanderson Brothers had already assisted Polaroid with the production of eyepieces for 3D viewing of industrial pictures. Because of this experience, Polaroid chose to work with Sanbro on this new venture. Sanderson Brothers did a considerable amount of the research and experimentation that made the large volume production of these 3D eyepieces possible, which led to them being used in theaters across the country. However, demands of the movie industry became so great that Sanbro’s production on a 24-hour basis could not produce enough eyepieces and other suppliers were called upon to supplement their production. 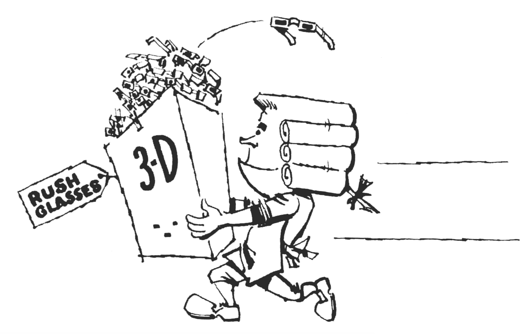 After seeing success with this auxiliary activity, it was deemed advisable to have the business incorporated. In 1955, Sanderson Brothers became a corporation with Buster and Bob holders of the majority stock. The trendiness of 3D eyepieces at the movies did eventually fade, as did the work the venture brought to Sanbro. However, they continued to hold their own in the commercial printing field. There is much more to this story, so for now let’s just say, to be continued... 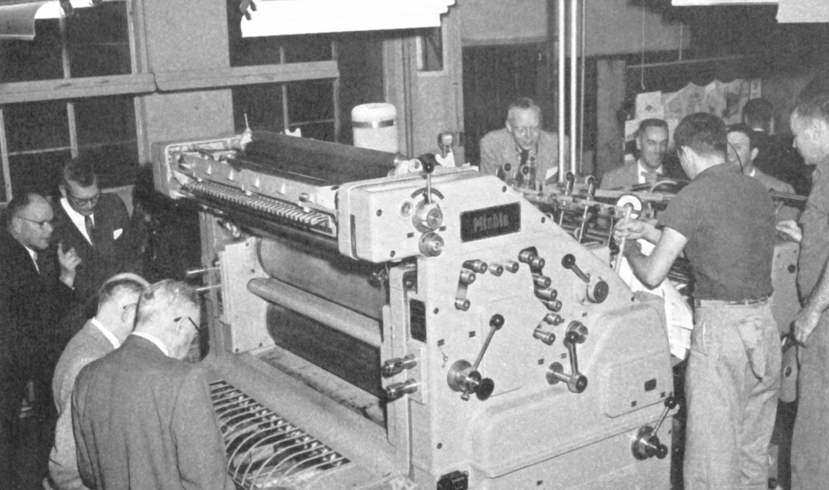